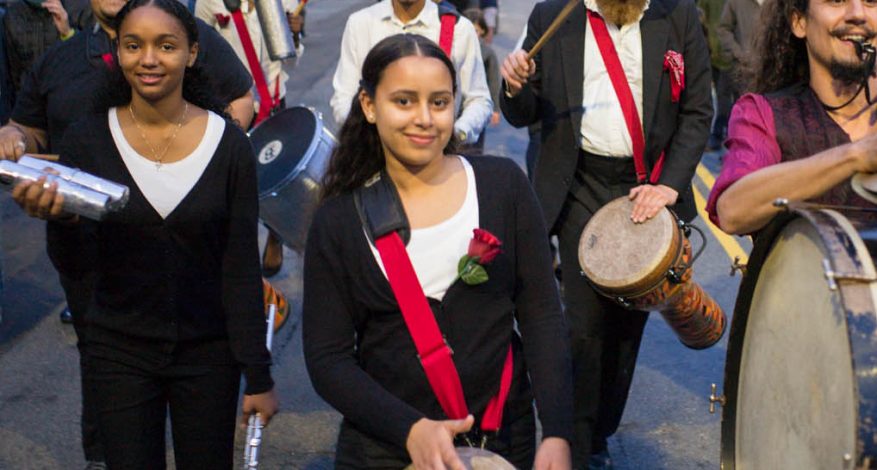 Allyah grew up around music, with family members playing instruments together at family gatherings. “But I was so much more reserved than I am now so I was shy to do it myself,” she shared. Still, her cousin—who was an HSTF staffer at the time—encouraged her and finally she joined Musicians in Community (MIC) and began training in Afro-Latin percussion.

What brought her out of her shell? “It was fun! And Cornell, our Resident Artist, is like, amazing. Not just staff but other youth were all very supportive. Having the ability to build that connection and feel comfortable around everyone helped me break out of that shell.” She had many memorable performances, and one of her absolute favorite songs to play was “Oye Como Va” by Tito Puente.

Allyah is now a sophomore Architectural Studies major. In the future she hopes to work on sustainable emergency reconstruction in Latin America, and is considering a double major in Latinx Studies. Not only that, she also has an internship at Amherst’s Office of Environmental Sustainability, is on the e-board of La Causa, Amherst’s Latinx Affinity Group, and plays Club Soccer.

When reflecting on the role HSTF has played in her life, Allyah said, “I honestly don’t think I’d be where I’m at. The support and resources I had at HSTF I did not have anywhere else. I don’t know if I would’ve applied to Amherst. HSTF helped me recognize my worth and what I’m capable of doing and helped me actually do the things I needed to do to get here.”